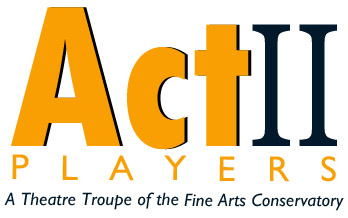 Jack and Charley are in love with Kitty and Amy. Both girls are about to go away, and the boys believe they’ve lost their shot. Then, like, Charley discovers his aunt, Donna Lucia, a Brazilian woman he hardly knows, is coming for lunch. How Rad! Now the aunt can chaperone while the boys ask the girls to marry them. Naturally, things don’t go as planned. Charley’s aunt is late! Gag me with a spoon! So the boys enlist the help of their friend, Michael Babberley, to impersonate her. What A Little Poser! A perfect mixture for a wild afternoon filled with mistaken identity, young love, old love, angry fathers, and chance meetings, brings lots of laughs to the audience! Gnarly!

GET YOUR TICKETS NOW

In Mark Montgomery’s comedy Good Answer! acting College President   Michael Kaminsky would like to get "Acting" removed from his job   title.  But that seems unlikely.

Facing an implacably hostile   administrative assistant, a publicly protesting student daughter, and an   impending visit by a desperately needed potential donor, the poor guy is   chained to his desk. Literally.

With its high farce   and witty dialogue, Oscar Wilde’s classic popular 1895 play The Importance of Being Earnest, sees   the protagonists maintaining fictional personas in order to escape the social   conventions of the Victorian era.

Sign up to hear from us about updates, shows and more! And don't worry, your email is only for us and not to be shared.